A lockdown is in effect at the Veterans Home of California in Yountville after reports of shots fired and a hostage situation. A SWAT team has been called to the location according to CalVet. At around 10:20 A.M. (pacific time), reports first came in regarding the shooting/hostage crisis. As many as 15 or 20 bullets were fired near Building G of the Veterans Home, according to current reports. The armed gunman may be a veteran and has reportedly taken up to three hostages. ATF agents and a SWAT team are responding to the scene. So far, there are no reports of injuries. But the suspect reportedly opened fire at responding officers. A standoff between the gunman and law enforcement continues.

Update (3/9/2018; 10:00 P.M. EST): Shortly before 6 P.M., authorities entered the veterans home and discovered the bodies of the gunman and three female deceased hostages, according to reports. The gunman and the hostages were reportedly all dead before authorities entered the building. It is suspected that the incident at the Veterans Home of California has turned into a triple murder-suicide. The Napa County Sheriff’s Department has identified the gunman, but have not released his name to the public. The three victims have been identified by the California Highway Patrol, who describes them as employees of a non-profit organization that specializes in working with veterans.

LIVE VIDEO: NBC Bay Area SkyRanger is above the scene of the shooting at veterans hospital in #Yountville, California. https://t.co/xP53bwvR4t pic.twitter.com/t5Z168D9nw

Photos of the scene at the Yountville Veterans Center https://t.co/PmEDdRErzO pic.twitter.com/5877m0fvLb

On Friday, there was reports on an active shooter incident at The Veterans Home of California, which resulted in a lockdown of the facility. According to an e-mail from Department of Veterans Affairs spokesman Johsua Kiser: “Law enforcement authorities have responded to the Yountville Veterans Home this morning following reports of gunfire near the main dining hall. The facility is on lockdown, and all residents and staff are sheltering in place. We will continue to update you as we get more information.”

Kiser spoke with the LA Times and informed them that the Veterans Home is on lockdown; the shades are drawn, the doors are locked, and everyone is on alert. According to the Napa Valley Register, the standoff between law enforcement and the shooter is at the Pathway’s Madison Building on the Veterans Home grounds. However, conflicting reports suggest that that standoff was at Building G, which houses veterans of Desert Storm.

#Breaking: Resident inside #Yountville Veterans Home which is on lockdown says person with body armor and weapon enters area in what he calls 'halfway house" . Building G he says houses veterans from Desert Storm. Armed gunman as 3 hostages.

Some reports suggest that as many as three hostages were taken. According to NBC Bay Area, early reports indicated that three hostages were taken and one shot was fired, but no injuries were reported. However, KRON4 reported many more shots were fired (30 to be exact) outside the main dining hall, but they weren’t sure whether or not these were live rounds. But now, new reports are suggesting that between 15 and 20 shots were fired before three people were taken hostage according to KTVU.

A helicopter as been deployed to the area of the active shooter/hostage crisis, along with ATF agents and a SWAT team. Here’s a bird’s eye view of the police response at the Veterans Home of California:

SkyFox is over the scene of the Yountville Veterans Center where police say at least 15 to 20 shots were fired and three hostages were taken https://t.co/PmEDdRErzO pic.twitter.com/wwedLvPBjb

As of this writing, the identity of the shooter is unknown. But Napa Valley Register reported that the gunman may be dressed in black, wearing body armor, and carrying an automatic weapon. One person on Twitter reported that her father is at Yountville, and that a resident told her that the gunman may be a veteran with PSTD. However, this report has not been confirmed.

My dad is at Yountville!
Jesus.
On lockdown, I'm told. He's ok. Police everywhere. A resident tells me they think it is a vet with PTSD? https://t.co/FfIPMlvisp

According to the Napa Valley Register, the gunman may be a member of the Pathway Home program for military veterans with emotional trauma. Early reports suggested that the suspect is 36 and had been discharged from the program two weeks priors.

Where is the Veterans Home of California? 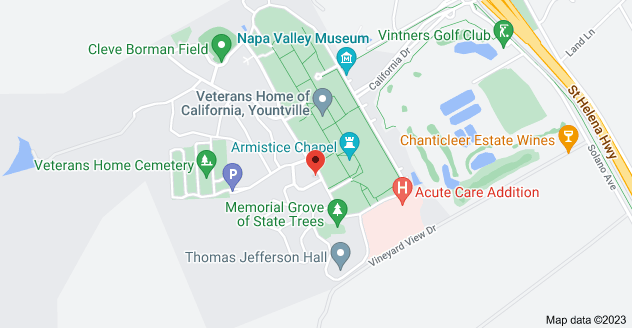 The Veterans Home of California is located at 260 California Dr, Yountville, CA. It is one of the largest veterans home in the nation. It provides shelter to 1,100 men and women of every age, from World War II era to present times. This Veterans Home was first established in 1884, creating a 600-acre campus.